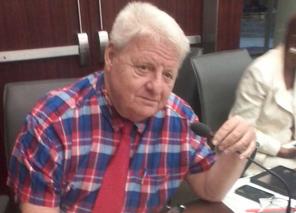 ​​​​​​​​​​"DADDY/ - You're Out to Save the World!"
My daughter's words about 7 years ago; I replied: "I didn't think anyone knew."
At the height of my first career (1975) as CEO of a security agency, I discovered the real Jesus and became a Christian.  I knew little of the Church, having spent 20 years as a God hater, blaming God for the actions of my own establishment White people especially toward blacks , Native Americans and others.  In my late teens this knowledge drove me to a Freedom Ride and Civil Rights demos.  This in turn closed the door to my impending police career. In 1965 civil rights advocates were dangerous subversives , and I was shunned by my family and many friends, church folks all.
On March 11, 1975 (age 32), I came to realize God did not hate Black people; it was people, people like me, who were the bigots. As I began my time in the church I discovered it was a breeding factory of prejudice, not just against black people but Jews, Latinos and almost "Everybody" else.
In studying the Bible I read Jesus teaching "You shall know the truth and the truth shall make you free," yet my new religion (and all other religions) began with a lie which demanded obedience, they called it "blind faith."  Years later I realized religions manufacture "blue elephant Gods" and "virgin births" to ensure followers will do whatever is asked. The tenant-in-common of all faiths is the demand adherents go and kill other people of OTHER faiths: "In OUR God's Name!" PS/those "others" respond in like kind= WAR!

I prayed and theorized the best way to help the human race was to use the power of religion for peace rather than war. I pursued ordination, completing 12 years of higher education culminating with a Doctorate from Boston University.  Along the way I met and studied under great Theologians, Sociologists, Historians and Economists.  I began to hope: "If we could wake the Religions out of their deadly sleep and do as God had intended, convincing all religious people to follow good instead of promoting evil, the world could be a more perfect society." My GREAT discovery was: Racial and cultural prejudice, its cousin War and violence and its main result hatred REQUIRE a God to get humans to "do these!"
I tried for 28 years, to the point of exhaustion.  Each time I would make headway, church politicians would gather their wagons and attack. Upon retirement I vowed to make one last effort.
I took 3 years to codify my 30 years of scriptural studies (Christian, Hebrew, the Koran, Bhagavad-Gita and Buddha.  I cross referenced each with my extensive studies in Historical Sociology, Economics and Social Psychology (my home looks like a library). I authored the first "tell all" study of religion and power: "The Jesus Book; Who He REALLY was - What He REALLY Said, A MOST unreligious book about a MOST unreligious man." (Renaissance Institute Press, Baltimore, MD 2012)  It features those "TRUTHS" Jesus spoke of:

My goal is to show "How the World Really Works" and expose the EVER PRESENT link between ALL religion (beginning with mine) and evil forces attempting to create Hell on Earth by introducing fear, war and pillage for profit.  This glue binding Power, Conquest and War can only be accomplished by having: "OUR GOD" be the ONLY God, rendering other people and their God as inferior and they less than human!"  This is the prime ingredient and the bottom line in the misery of the human condition and the destruction of planet Earth.
My final discovery, beginning with study in 2002, is the basic building blocks of all human behavior - HUMAN SOCIAL MEMES. (*)  This led to the first treatise on the natural and normal behavior of all such Memes, identical regardless of Memel purpose (Family, religion, corporation or nation).  These 55 default settings I named Meme Law (The Book of Meme Law. Britt Minshall. Baltimore: Renaissance Institute Press, 2016)
My friends accuse me of "being EXTREMELY spiritual but most unreligious" - just like Jesus!
Britt Minshall (Pastor Britt) is Dean of the Institute. He comes from Chester, PA but now resides in Baltimore, MD - he is 74 years old. As a teenager he became a Civil rights demonstrator and has written, preached and taught Human Rights all of his life.Britt holds a BA from Thomas Edison State College; a Masters in Counseling from Emory University (Counselling Psychology) and a Doctorate (D.Min) from Boston University '92 (Social Psychology / Group Dynamics). The author of several books, he is an ordained United Church Pastor (Ret) and is also ordained into the Full Gospel . He has served as a missionary in Haiti and a Pastor in Florida and Maryland and served 4 years as a Hospital Chaplin.
(*) As of 2017 we are encouraged by the writings of Daniel Dunnett, Pres. of Tufts University School of Arts and Science, a world respected Philosopher and Sociologist. His book declares Memes to be the sole source of all Human consciousness. NY: W.W. Norton, From Bacteria to Bach and Back: the Evolution of Minds 2017.